World Finals is a celebration of creativity! To help celebrate creative thinking, various awards are given during the Opening and Awards Ceremonies. Learn about them here!

The Opening Ceremony: The beginning of a three-day whirlwind of creativity, competition, and fun. The ceremony is the official opening of the World Finals competition. Students will meet and support each other, as well as represent their state or country in a parade. It’s a high-energy beginning to a sensational three days of creative problem-solving, fun, and teamwork. You can watch the ceremony at home via our live broadcast. The link will be posted on social media and on the WF homepage. 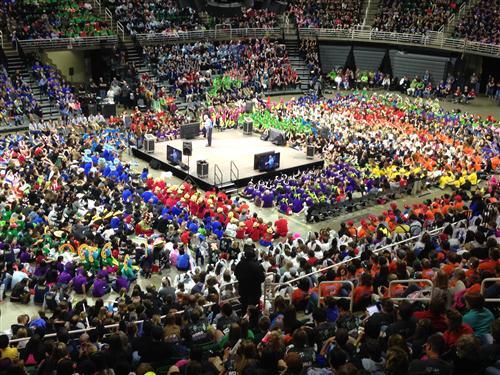 The Awards Ceremony: The culmination of three exciting days of competition and camaraderie. Not only are special awards announced, but the world champions of creativity are announced. You can watch the Awards Ceremony at home via our live broadcast. The link will be posted on social media and the WF homepage.

Place Awards: Out of approximately 850 teams, 19 will be named World Champions. Teams placing 1st, 2nd, and 3rd in each problem and division receive a trophy, and each member of those teams receives a medal. Teams placing 4th, 5th, and 6th receive an honorable mention.

Ranatra Fusca: The Ranatra Fusca Creativity Award is given to a team or individual for demonstrating outstanding creativity. This award embodies all that the Odyssey of the Mind program represents. It is presented at all levels of competition from regional tournaments to World Finals.

Individuals and teams who receive this award at World Finals are presented with gold medals, and their coaches receive a plaque for their school. The names of these individuals and teams are engraved on the Ranatra Fusca trophy. This tradition has been honored every year since 1980.

The Ranatra Fusca trophy is displayed each year at the World Finals Awards Ceremony and at the Creativity Festival. It has also been on display in Explorer’s Hall at the National Geographic Society building in Washington, D.C.

OMER’s Award: OMER’s Award recognizes those individuals, coaches, team members, parents, officials and others who, during a tournament, serve as exemplary examples or role models through their actions or words. This award is also bestowed on team members who exhibit exceptional skill and talents. Each recipient of an OMER’s Award receives a special medal.

Creativity Award: The Odyssey of the Mind Creativity Award is presented to an individual or organization to recognize outstanding contributions to the development of human creativity, extraordinary creativity in a personal achievement, or the application of creativity to benefit society.

This year’s Creativity Award will be announced soon!