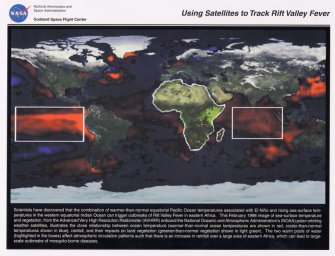 Rift Valley Fever (RVF), at least in the African country of Kenya, has been well known for over 60 years. As early as 1913, a disease fitting the description of RVF was blamed for the loss of sheep in the Rift Valley in Kenya. However, it was not until scientists studied an outbreak of the disease in 1931 that a virus was isolated and shown to cause the disease. Since that time, major outbreaks of RVF have been noted throughout sub-Saharan Africa, with occasional outbreaks noted in other parts of the Africa continent. For example, in Egypt, several hundred people were infected and thousands died from RVF during a violent epidemic of this disease in 1977-78.

What is the Rift Valley?

Africa's Great Rift Valley is a 6,000-mile crack (fissure) in the Earth's crust, stretching from Lebanon to Mozambique. One of its most dramatic sections slices through East Africa, dividing Kenya into two segments. Geologists know that the Rift Valley was formed by violent subterranean forces that tore apart the Earth's crust. These forces caused huge chunks of the crust to sink between parallel fault lines and force up molten rock in volcanic eruptions. Evidence that this process, called rifting is still in progress comes from the many active and semi-active volcanoes located along the rift. Evidence of volcanic activity along the rift is provided by the presence of numerous boiling hot springs.

The RVF virus was first isolated in 1931 from the blood of a newborn lamb and later from the blood of sheep and cattle. Then, as a result of the correlation of a series of events in the 1930s, one of the carriers for the virus was found to be the mosquito. In July 1930, Kenya was hit with very heavy rains that substantially increased the wetlands where mosquitoes bred. At the same time, occurrences of the disease increased. Those studying the disease made the connection between increased rains, wetlands, mosquitoes, and disease, and were eventually able to identify the virus associated with the disease. The RVF virus was isolated from mosquitoes belonging to several genera (Aedes, Culex, Mansonia, Anopheles, and Eretmapodites).

Between October 1997 and January 1998, heavy rains drenched eastern Kenya and southern Somalia, which led to an outbreak of RVF that killed many cattle and eventually spread to the local human population. The World Health Organization estimated a total of 200-250 deaths and 89,000 cases in southern Somalia and northeastern Kenya, one of the largest outbreaks in history.

Much is still being learned about RVF and scientists have expanded their theories about how the disease spreads. Besides transmission by mosquitoes, it is believed that animals spread the virus directly to other animals, that humans spread it directly to each other. It is believed that all three transmission modes operate during a major outbreak of this potentially lethal disease.

Scientists believe that the virus is also “maintained” between outbreaks by two possible means: (1) by drought-resistant mosquito eggs that can lie dormant for years waiting for adequate moisture in which to mature and (2) a “wild reservoir,” i.e., the virus survives at a nonfatal, low-level of infection in some animal species. These animals maintain enough viral particles to cause major outbreaks.

NASA research into the El Niño phenomena and the subsequent study of RVF are part of NASA's Earth Science Enterprise, Washington, DC, dedicated to the long-term study of how human-induced and natural changes affect the global environmental system.

* The NDVI is a complex ratio of surface reflectance in the red and near-infrared portions of the electromagnetic spectrum that quantifies the “greenness” of vegetated areas. The higher the NDVI, the more “green” a vegetated area.