This collection was created based upon work supported by NASA under award No. NNX16AE28A. Any opinions,
findings, and conclusions or recommendations expressed in this material do not necessarily reflect the views of
the National Aeronautics and Space Administration.

Solar eclipses have captured the imagination, provoked fear, and changed the course of history. The August
21, 2017 Total Solar Eclipse across America was seen by millions on four continents. For some, it was the
first time they saw a solar eclipse.

● What would/does seeing an eclipse mean to you, using only 6 words.

Share your spontaneous responses with this NASA project: http://eclipse2017.nasa.gov/

Earth Images. Satellites in space have a great view of Earth. They take observations and images that scientists
use to study our planet. While many of these pictures look like works of art, there is a story within each image.

You are a scientist analyzing the image. Describe what you see in this image that may cause you to call a press
conference. 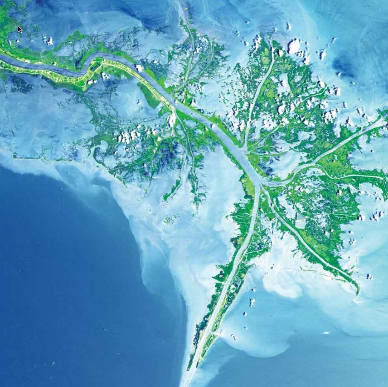 Background: After receiving the Arkansas and Red Rivers, the Mississippi River travels to its terminus and joins
the Gulf of Mexico. The river’s turbid waters spill out into the Gulf of Mexico, and its suspended sediment is
deposited to form the Mississippi River Delta. As seen in this 2001 Terra image, marshes and mudflats (shades
of green) prevail between shipping channels cut into the bird’s-foot delta. The marshes protect the mainland
from storm surges and provide a home for fish and wildlife.
Learn more about this image and about many more NASA Earth images.

Imagine you live in community south of this lake. What do you tell your children must have happened, to cause
your lake to turn from green to red?

Background: A response may include some explanation of the following: Some combination of algae and
bacteria is periodically turning Iran’s Lake Urmia from green to red.First image taken on April 23, 2016 and the
second on July 18, 2016 by the Moderate Resolution Imaging Spectroradiometer (MODIS) onboard NASA’s
Aqua satellite.

● Imagine you are an astronaut on a mission to Mars. What would you need to take with you for the journey?

● Imagine you are that same astronaut returning from a long mission on Mars. What would you want to do first when you are back on Earth?

● Imagine you are a NASA scientist out in the field in a very remote area doing data collection to verify satellite information about (precipitation, land cover, soil moisture, etc.). Tell a story about where you would go, what you and your team might encounter and obstacles you might have to overcome.

● You are touring a NASA research center, such as Kennedy Space Center in Florida or Jet Propulsion Laboratory in California. What types of jobs might you see people doing? (Think outside the box!)

● Working in space: Astronauts have to deal with a lot of challenges when working in space, including how difficult it is to manipulate tools in space suit gloves. Use the given materials to design a tool to pick up (various small objects, that could be given more interesting names/purposes) while wearing mittens. This would be in two parts – time to design and test the tool, and time to actually attempt to
retrieve as many objects as possible.

● Satellite retrieval: You need to retrieve a satellite and and bring it in closer for repairs. Use the given materials to build a tool that can retrieve the model satellite from a distance. This would be in two parts, time to design and test the tool, and time to actually retrieve the satellite. (Imagine a table and tape line 2-3 feet away that cannot be crossed by the students. They have to build something to reach across the gap.)

● Building hurricane resistant towers: This activity is related to hurricanes, which NASA studies, and has been well tested with students: https://pmm.nasa.gov/education/interactive/building-hurricanes-engineering-design-challenge

● Show pictures of weird-looking tools or equipment that have been used by astronauts or scientists/engineers on the ground. Ask students to brainstorm what they could be used for.

● Astronauts on Mars will experience a communication delay with Mission Control on Earth of between 3 and 22 minutes, depending on where the planets are in their orbits. Create a short skit that incorporates an amusing situation that might result from that communication delay. (This would be two parts – planning time and presentation time of the short skit. Could include props, or could just be pantomime.)

● Build a satellite: Use the materials provided to build an Earth-observing satellite, and then tell a story about what it would be used for.  Make sure you include a description of the parts of your satellite, the instruments it would have on it, and the scientific questions it would help to answer.

● Astronauts have travelled to a planet orbiting a star that is brighter and hotter (or cooler and dimmer) than our Sun. Describe what they might find in their explorations of that planet.