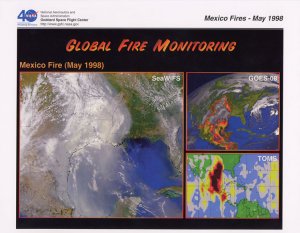 Satellites provide observation capability for monitoring different fire characteristics such as fire susceptibility, active fires, burned area, smoke, and trace gases. Specifically, these images represent the detection of smoke, haze, and pollutants associated with raging fires in Mexico and Central America during May 1998.

Many of the fires were started by farmers, who traditionally clear land by burning fields. A severe drought, thought to be caused by the effects of El Niño, had dried out the typically moist area, making conditions particularly ripe for wildfires.

Smoke and aerosol particles from large-scale biomass (trees and vegetation) burning can rise high into the troposphere and be carried long distances by wind currents. Smoke plumes from Mexico traveled as far north as Wisconsin and the Dakotas, and as far east as Florida and out over the Gulf Stream. Smoke and haze caused health alerts to be issued in Texas as residents suffered scratchy throats and watering eyes and it even grounded aircraft at major airports in Texas and Mexico.

The Effect of Aerosols on Climate

Aerosols have a two-fold cooling effect on climate. In a clear atmosphere, they scatter and absorb incoming solar radiation, thereby reducing the amount of sunlight that reaches the surface. Moreover, aerosols act as "seeds" - called cloud condensation nuclei causing water vapor to condense and form cloud droplets. When clouds form in the polluted atmosphere, the clouds' droplets tend to be smaller and more numerous. Because polluted clouds are typically comprised of more densely-packed droplets, they are more efficient at absorbing and reflecting sunlight, again having a cooling effect on the surface.

Aerosols represent one of greatest areas of uncertainty regarding climate change, both on global and regional scales. Scientists do not fully understand the magnitude of their cooling influence on climate.

Sea-viewing Wide Field-of-View Sensor (SeaWiFS) true-color image of the Southeastern United States and Gulf of Mexico on May 14, 1998. The image is a combination of three visible wavelengths (412, 555, 670 nanometers) of SeaWiFS calibrated data as observed by the spacecraft. This color composite highlights vegetation and clouds. Heavy white areas are clouds and dense aerosols while the lighter, softer white areas represent smoke and haze. Smoke and haze are especially noticeable over the western half of the Gulf of Mexico and over the states of Louisiana, Mississippi, Arkansas, and Missouri. The SeaWiFS instrument consists of an optical scanner and an electronics module and is carried by the OrbView-2 spacecraft in a polar orbit at an altitude of 705 km.

National Oceanic and Atmospheric Administration (NOAA) Geostationary Operational Environmental Satellite (GOES)-8 false-color image of North America (visible and infrared data) enhanced to show areas of smoke and aerosols. White and gray areas are clouds; red and green areas represent high and low concentrations of aerosols, respectively. GOES-8 was launched into a geosynchronous orbit, which means it orbits the equator at a speed matching the Earth's rotation, allowing it to hover continuously over one position on the surface, at an altitude of 35,800 km.

Earth Probe Total Ozone Mapping Spectrometer (TOMS) detection of aerosols from the fires in Mexico and Central America using the TOMS aerosol index on May 14, 1998. The aerosol index is a measurement of the amount of ultraviolet (UV) radiation-absorbing aerosols such as dust, smoke (sulfates), and other pollution in the atmosphere. The index is (roughly) calculated by subtracting the opacity of a "dirty" (smoke, dust, etc.) atmosphere from the opacity of a "clean" atmosphere. Red and black areas indicate a high percentage of UV-absorbing aerosols while the green areas are representative of a low percentage of UV-absorbing aerosols. Earth Probe TOMS circles the Earth in a polar orbit at an altitude of 740 km.

Additional information can be found on the World Wide Web at: