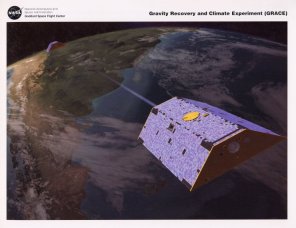 The first NASA Earth System Science Pathfinder (ESSP) mission to launch is the Gravity Recovery and Climate Experiment (GRACE). The GRACE mission will accurately map variations in the Earth’s gravity field over its 5-year lifetime and the resulting improvements in precision of gravity measurements is expected to revolutionize our understanding of key climatological phenomena. The GRACE mission will have two identical spacecraft flying about 220 kilometers apart in the same polar orbit 500 kilometers above the Earth. The GRACE-twins are scheduled to launch in early 2002.

GRACE will be able to map the Earth’s gravity fields by making accurate measurements of the distance between the two satellites, using GPS and a microwave ranging system.

It will provide scientists from all over the world with an efficient and cost effective way to map Earth’s gravitational field with unprecedented precision and resolution. The results from this mission will reap benefits for numerous disciplines that rely on this data to study changes in the solid Earth. GRACE will also collect data intended to yield more accurate profiles of atmospheric pressure, temperature and humidity, leading to improved weather forecasts.

The distribution of mass over the Earth is non-uniform. GRACE will determine this uneven mass distribution by measuring changes in Earth’s gravity field. The term mass is a way to talk about the amount of a substance in a given space, and is directly correlated to the density of that substance. For example, a container filled with a more dense material, like granite rock, has more mass than that same container filled with water. Because mass and density are directly related, there is also a direct relationship between density and gravity. An increase in density results in an increase in mass, and an increase in mass results in an increase in the gravitational force exerted by an object. Density fluctuations on the surface of the Earth and in the underlying mantle are reflected in variations in the gravity field. As the twin GRACE satellites pass over the Earth’s surface, they sense these variations in density (the orbital motion of the satellites changes) and a gravity field map can thus be constructed.

Geodesy is the science dedicated to precise measurements of Earth’s gravity field. The GRACE mission will render the gravity field (referred to as a geoid) with unprecedented precision and resolution. A more accurate geoid will increase the accuracy of satellite altimetry, synthetic aperture radar interferometry, and digital terrain models covering large land and ice areas – all used in remote sensing applications and in cartography. These techniques provide critical input to many scientific models used in oceanography, hydrology, geology and related disciplines and, for this reason the Earth Science community eagerly anticipates the GRACE launch.

In addition to the primary gravity measurement, the two Global Positioning Satellite (GPS) receivers on GRACE will be used to scan the Earth’s limb and determine how much error is introduced into GPS measurements as the GPS signal passes through the atmosphere. This is done using a technique known as occulation, where the GPS receivers track refracted signals from the GPS satellites as they rise or set through the Earth’s atmosphere and compare them to a non-occulting GPS satellite. Improvements to the accuracy of GPS measurements expected to result from these measurements will in turn improve the accuracy of soundings of key atmospheric parameters that serve as input into numerical weather prediction models.

The GRACE Project is divided into the following five systems:

The SIS includes all elements of the inter-satellite ranging system, the GPS receivers and associated sensors such as the Star Cameras. This system also coordinates the integration activities of all sensors, assuring their compatibility with each other and the satellite.

The LVS includes the ROCKOT launch vehicle, multi-satellite dispenser, personnel, test equipment and facilities for preparation, integration and launch of the satellites. The LVS is managed by the launch vehicle manager at Deutsches Zentrum für Luft und Raumfahrt (DLR) and supported by the JPL Project and its contractors.

The MOS consists of facilities and resources of the German Space Operations Center (GSOC), tracking antennas at Weilheim and Neustrelitz, and other stations and facilities. These facilities are used to monitor and control the satellite, perform initial processing of the telemetry data, and deliver all data to the Science Data System for further processing and generating science products. Mission operations are conducted at the GSOC control center in Oberpaffenhofen, Germany.

The SDS functions include science data processing, distribution, archiving and product verification. The SDS is a distributed entity and managed in a cooperative approach by JPL and the University of Texas Center for Space Research (UTCSR) in the US and the GeoForschungsZentrum Potsdam (GFZ) in Germany.

GRACE is a joint partnership between the National Aeronautics and Space Administration (NASA) in the United States and DLR in Germany. The Principal Investigator is from UTCSR and the Co-Principal Investigator is from the GFZ. JPL has responsibility for the Project Management and Project Science of GRACE. Goddard Space Flight Center maintains responsibility for Mission Management.

The ESSP missions are an integral part of a dynamic and versatile program consisting of multiple Earth system science space flights. The ESSP program is characterized by relatively low-to moderate-cost, small-to medium-sized missions that are capable of being built, tested and launched in short-time intervals. These missions are capable of supporting a variety of oceans, land surface, polar ice regions and solid Earth. Investigations include development and operation of remote sensing instruments and the conduct of research investigations using data from these instruments. Subsequent launches are planned over the next few years.