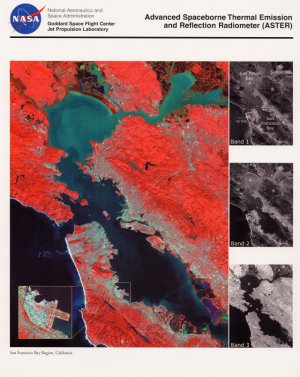 This image of the San Francisco Bay region was acquired on March 3, 2000 by the Advanced Spaceborne Thermal Emission and Reflection Radiometer (ASTER) on NASA's Terra satellite. With its 14 spectral bands from the visible to the thermal infrared wavelength region, and its high spatial resolution of 15 to 90 meters (approximately 50 to 300 feet), ASTER will image Earth for the next 6 years to map and monitor the changing surface of our planet.

This image covers an area 60 kilometers (37 miles) wide and 75 kilometers (47 miles) long in three bands of the reflected visible and infrared wavelength region. The combination of bands portrays vegetation in red, and urban areas in gray. Sediment in the Suisun Bay, San Pablo Bay, San Francisco Bay, and the Pacific Ocean shows up as lighter shades of blue and green. Along the West Coast of the San Francisco Peninsula, strong surf can be seen as a white fringe along the shoreline. A powerful rip tide is visible extending westward from Daly City into the Pacific Ocean. In the lower right corner, the wetlands of the South San Francisco Bay National Wildlife Refuge appear as large dark blue, brown, purple, and orange polygons.

The high spatial resolution of ASTER allows fine detail to be observed in the scene. The main bridges of the area (San Mateo, San Francisco-Oakland Bay, Golden Gate, Richmond-San Rafael, Benicia-Martinez, and Carquinez) are noticeably visible, connecting the different communities in the Bay area.

For the Classroom - False Color Imagery

When viewing images such as the image of San Francisco on the front of this lithograph, scientists are often asked why certain parts of the image are red and other parts blue, green, gray, or purple, etc. This is because they have chosen to display three different wavelengths in the image where the surface is highly reflective (bright) at those wavelengths. These colors are the result of using instruments that are sensitive to different parts of the spectrum, different from the part that our eyes are sensitive to (the visible portion of the spectrum).

The ASTER instrument on board the Terra spacecraft does not "see" in color. Every image is obtained in a gray scale from black to white based on brightness of radiation at a precise wavelength (between 0.52 and 11.65 microns). These electronic cameras only collect digital signal levels that are displayed as gray scale images from black to white, but they can obtain many images at the same time in different parts of the spectrum.

Notice that the vertical axis (called % atmospheric transmission) shows where Earth’s atmosphere allows a lot of the radiation, including the sun's rays, to reach the ground. It is easy to see why our eyes work in the visible part of the spectrum, because it's here that almost 100% of the sun's energy reaches the surface. In contrast, due to water vapor in the atmosphere, almost no energy (roughly 0% trans- mission) reaches the ground at 1.4 and 1.9 microns.

This image of the San Francisco Bay area was obtained using ASTER Bands 1, 2 and 3 (representing a spectral range of 0.52 to 0.86 microns) as a set of three individual, yet simultaneous black and white images. In the diagram above, all of ASTER's 14 "bands" are represented, along with the wavelength of the band. Note that not all bands have the same wavelength range, i.e., bands 3 and 4 have a range of. I microns (wide) while bands 5 and 6 have a range of 0.04 microns (narrow).

For example, at point "A" in Bands 1 and 2, sediment is revealed in the bays, but is barely noticeable in Band 3. At the shorter wavelengths of Bands 1 and 2, light penetrates the deepest into water, and the sediment reflects the light. At point "B" in Bands 1 and 2 vegetated areas are quite dark, but at the same place in Band 3, vegetation appears quite bright. Vegetation reflects light very strongly in the near infrared wavelength region, and so appears bright in Band 3. This is due to the reflective nature of chlorophyll in the leaves at these wavelengths. Additionally, light is almost completely absorbed by water at these wavelengths, so very little detail is visible. Finally, Bands and 2 display a great contrast between vegetated and urban areas at point "C", while the difference is barely noticeable in Band 3.

Brightness differences can be further understood by examining the figure above. The figure shows three curves, each called a reflectance spectrum, for three different materials-water, concrete (urban areas), and vegetation. In each spectrum, the percentage of light that is reflected is shown as a function of wavelength. Notice that "vegetation" is very bright around 0.8 microns compared to concrete. The relative contrast is reversed at wavelengths around 1.5 microns. Water, in comparison, is brightest at short wavelengths, roughly 0.7 microns, and we see no reflection at a wavelength longer than about 0.9 microns. Using these spectra, we can under- stand the relative contrast of the water, vegetation, and urban areas. Lf we continued these spectra to thermal wavelengths, we would also have seen that temperature becomes important, with hot objects being brighter than cooler objects.

Having seen that different bands (or wavelengths) have a different contrast, we can now understand how the computer can produce a false color image from a remote sensing data set. To do this, we start with the three black and white images corresponding to Bands 1, 2 and 3. Then, just like a color television set, our computer screen can display three different images using blue light, green light and red light. The combination of these three wavelengths of light will generate the color image that our eyes can see. So, if we display Band 1 in blue light, Band 2 in green light, and Band 3 in red light we get the relative contrast between the three images. More importantly, when these three colors are combined we get our color image (the image on the front of this lithograph), which we call a "false color image,

because it has nothing to do with the colors we see with our eyes.