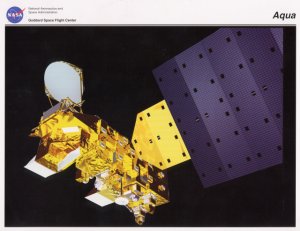 The Aqua mission builds on NASA’s long history of studying the Earth and its atmosphere from the impressive perspective of space. NASA scientists and others have been doing such studies since the 1960s, and the efforts by now have matured to the point where many Earth science elements are being studied together as a global system. Earth System Science integrates several important scientific disciplines, including meteorology, atmospheric chemistry, oceanography, glaciology, hydrology, and biology. Amongst the aims are an integrated understanding of the Earth system at present, an improved understanding of the prominent changes the system has undergone in the past, and improved predictions regarding how the system is likely to change in the future. Satellites contribute toward these goals by enabling the collection of global data sets that would be impractical through any other available means.

The Aqua spacecraft, and more broadly the Earth Observing System (EOS) of which Aqua is a part, continues NASA’s commitment to studying the Earth as a global system. Aqua will carry six state-of-the-art instruments to observe the Earth’s oceans, atmosphere, land, ice and snow covers, and vegetation, providing high measurement accuracy, spatial detail, and temporal frequency. This comprehensive approach, provided by both Aqua and the earlier Terra satellite launched in December 1999, enables scientists to study interactions among the many elements of the Earth system.

Aqua, Latin for “water,” is named for the large amount of information that the Aqua spacecraft will collect about the Earth’s water cycle. In particular, the Aqua data will include information on water vapor and clouds in the atmosphere, precipitation from the atmosphere, soil wetness on the land, glacial ice on the land, sea ice in the oceans, snow cover on both land and sea ice, and surface waters throughout the world’s oceans, bays, and lakes. Such information will help scientists to improve the quantification of the global water cycle and to examine such issues as whether or not the cycling of water might be accelerating.

In addition to information about the water cycle, Aqua will also provide information on many additional elements of the Earth system. For instance, Aqua will enable studies of the fluxes of radiation from the radiation balance. It will also enable studies of small particles in the atmosphere termed “aerosols” and such trace gases in the atmosphere as ozone, carbon monoxide, and methane. The trace gases each have a potential contribution to global warming, whereas the aerosols are more likely to have a cooling effect. Aqua will also provide observations on vegetation cover on the land, phytoplankton and dissolved organic matter in the oceans, and the temperatures of the air, land, and water. All of these measurements will have the potential to contribute to improved understanding of the changes occurring in the global climate and the role of the interactions among the various elements of the climate system.

One of the most exciting of the potential practical benefits likely to derive from the Aqua data is improved weather forecasting. Aqua will carry a sophisticated sounding system that will allow determination of average atmospheric temperatures in 1-kilometer-thick layers to an accuracy of 1° Celsius. This will be done throughout the troposphere, the lowest portion of the atmosphere. The troposphere extends to an altitude of about 10-15 kilometers, depending on location, and contains most of the global cloud cover. The anticipated 1° Celsius accuracy far exceeds current accuracies from satellite observations and, in conjunction with the moisture profiles also obtainable from the Aqua sounding system, will offer the potential of improved weather forecasting. NASA is working with the U.S. National Oceanic and Atmospheric Administration and the European Centre for Medium-Range Weather Forecasts to facilitate the incorporation of the Aqua data in their weather forecasting efforts.

Aqua is a joint project among the United States, Japan, and Brazil. The U.S. provided the spacecraft and the following four instruments; the Atmospheric Infrared Sounder (AIRS), the Clouds and the Earth’s Radiant Energy System (CERES), the Moderate-Resolution Imaging Spectroradiometer (MODIS), and the Advanced Microwave Scanning Radiometer for EOS (AMSR-E); and Brazil’s Instituto Nacional de Pesquisas Espaciais (INPE, the Brazilian Institute for Space Research) provided the Humidity Sounder for Brazil (HSB).

Overall management of the Aqua mission is located at NASA’s Goddard Space Flight Center in Greenbelt, Maryland. Goddard also provided the MODIS and AMSU instruments, is managing the integration and testing of the spacecraft, will operate Aqua once launched, and will receive, process and disseminate much of the science data through the EOS Data and Information System (EOSDIS). Goddard manages EOS for NASA’s Earth Science Enterprise, headquartered in Washington, D.C. NASA’s Jet Propulsion Laboratory, Pasadena, California, provided the AIRS instrument; and NASA’s Langley Research Center, Hampton, Virginia, provided two CERES instruments, which will allow coincident measurements by one CERES scanning in lines perpendicular to the path of the satellite and by the other CERES scanning in lines at various angles with respect to the satellite’s path. TRW constructed the Aqua spacecraft and is carrying out at its facilities in Redondo Beach, California, the spacecraft’s integration and testing.

Aqua is scheduled for launch in 2002 aboard a Delta II 7920 launch vehicle from Vanderberg Air Force Base, California. NASA’s Kennedy Space Center, Florida, is responsible for the launch operations, including the Delta launch vehicle and the pre-launch integrated processing facility, the former under a contract with the Boeing Company and the latter under a contract with Spaceport Systems International. The U.S. Air Force is responsible for all range-related matters.

During launch, Aqua will rise to an altitude of 680 kilometers, after which it will be boosted to its final orbital altitude of 705 kilometers (438 miles). The launched spacecraft will positioned in a near-polar orbit around the Earth in synchronization with the Sun, with its path over the ground ascending across the equator at the same local time every day, approximately 1:30 p.m. Correspondingly, on the other side of its orbit, Aqua will descend across the equator at approximately 1:30 a.m. The early afternoon observation time contrasts with the 10:30-10:45 a.m. equatorial crossing time (descending in this case) of the EOS Terra satellite, launched in December 1999. The two daytime crossing times account for why the Terra and Aqua satellites were originally named “EOS AM” and “EOS PM,” respectively. The combination of morning and afternoon observations will allow studies concerning the diurnal variability of many of the parameters discussed above.

Image rendered by Reto Stockli, based on a prior image by TRW. Text by C. Parkinson, Aqua Project Scientist, Goddard Space Flight Center.